Throwing a headscarf between fighting men: A Georgian way to stop conflict

As a young Georgian woman, I experienced all the cruelties of the war first-hand. At the age of 30, I recklessly enrolled in the medical unit of a tank battalion to take care of soldiers and wounded civilians in the Georgian-Abkhazian War that ravaged between 1992 and 1993. Little did I know that on the frontline, I would see the empty stare of death on so many faces. I understood quickly that the horrors of the war should never be repeated. No one should see what I have seen and hear what I have heard; no one should feel what I have felt.

I was lucky that after the war my cousin, who worked for the Georgian government, convinced me to attend a conflict resolution training. I must admit that in the beginning, I was extremely sceptical about the purpose of the training. I did not believe that it would teach me something new. But I was wrong. The training sparked my desire to learn more about conflict resolution as a means to prevent war and violence. It was the moment I decided to contribute to finding a solution to the Georgian-Abkhazian conflict.

Where we stand: the frozen conflict between Georgians and Abkhazians

To work on peacebuilding in the region one has to understand the complex history of the Georgian-Abkhazian conflict as the region in its recent history went through extensive political turmoil. The conflict started with the fall of the Soviet Union in 1991. Abkhazia, located on the eastern shore of the Black Sea, refused to be part of Georgia and wanted independence and secession from it. This led to two extremely brutal and bloody wars, instigated by Russia. As a result, 350,000 Georgians living in Abkhazia had to flee or were expelled. Since then the conflict remains unresolved, hence the term frozen conflict and the development towards peace is slow.

I know that women are crucial to solving this stalemate. I have witnessed with my own eyes how women unite to oppose war and do everything in their power to strive for peace.

It did not really come as a surprise as women have been active in conflict resolution in Georgia for a long time. There is a beautiful tradition: a woman throwing her headscarf between fighting men immediately stops the conflict.

Because of my experience and conviction that women are the key to successful peacebuilding, I founded the women’s association Acting Together. We support women and young people affected by the conflict by strengthening their communication skills and involving them in negotiation processes. Through my organisation, I joined the GPPAC Network of Women Mediators of South Caucasus, a unique network that has learning and knowledge exchange between women peacebuilders in the region at the core. The women in the Mediators Network share their experience and expertise and continue to support and encourage me. They give me hope.

I have never stopped working for peace in the region. I am a fierce believer that we need to continue to invest in dialogue between the Georgian and Abkhaz people.

It is only through hearing each other out that we can build trust - one of the foundations for peace.

Over the years, I have participated in many dialogues and one encounter has burnt itself into my memory. During a mediated training session between Abkhaz and Georgian women,  Abkhaz women refused to engage with us, Georgian women, for days. Then, on the fourth day, I met an Abkhaz woman near the elevator and asked her in the Abkhaz language how she was doing. This question made a difference and she slowly started opening up to me. She fully changed her perception of me when I told her that my grandmother was also from Abkhazia.

This experience is just one of the many examples of how important it is to meet and try as much as we can to rebuild trust between the people of  Georgia and Abkhazia. We do not see each other as enemies. All we want is to overcome the deep-rooted animosity as we wish to live together in peace, in our own homes and build a democratic country with them.

It breaks my heart to notice that the international community seems to have lost interest in the frozen conflict in Georgia.

I think if we have learned one thing from the war in Ukraine, it is that peace is never a given. Tanks can roll in overnight and old conflicts can awake as quickly as a dormant volcano.

Preventing this from happening is less expensive than dealing with the consequences of violence. To counter triggers that can lead to full-scale violence, we need the international community to invest in dialogue, encourage learning from and with each other, and support joint activities between Georgians and Abkhazians. As for me, I will continue to build bridges between people because I know that civil society-led peace initiatives are as important as high-level peace talks as they make peace root in and grow from the community level.

Humanizing the Nagorno-Karabakh Conflict: The Transformative Power of Youth 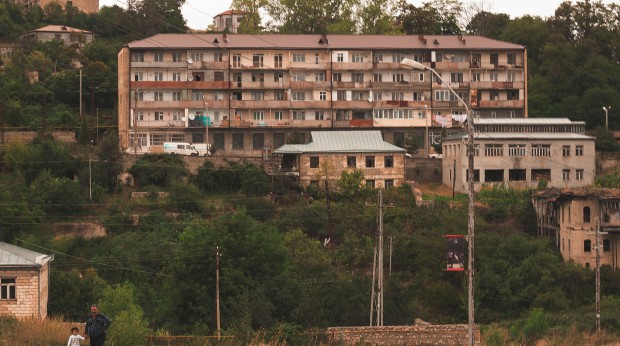