In the Kaabong district in the North of Uganda, climate change amplifies conflict drivers that can lead to increased social or violent conflict. Kaabong is a semi-arid climate which makes the region prone to droughts. That is why those living in Kaabong have historically relied on pastoralism as their primary source of livelihood. Water scarcity is felt in the neighbouring countries, Kenya and South Sudan, which forces pastoralists to move across the border into Uganda, leading to competition over the limited resources. Cattle rustling and theft have been prevalent among the ethnic groupings in the region and the neighbouring countries. This has increased tensions among the various ethnic groups.

The relationship between climate change and conflict in Kaabong offers a unique opportunity to explore their interaction and set up structures to identify and address climate security risks. Concretely, this means that local peacebuilders and climate experts document the various pathways through which climate change contributes to insecurity at the local level and vice versa. Documenting and demonstrating evidence of the interaction between climate change and insecurity at the local level provides valuable data to support local and national decision-makers prioritising action and developing strategies for climate change mitigation and adaptation.

To address climate security risks in Kaabong and build sustainable peace, locals identify risks and prioritise local entry points for action through community-led determination of impact. This means that local climate change impact data is analysed with context-specific drivers of instability and sources of resilience - the foundation for successful peacebuilding.

Two concrete steps allowed us to develop local indicators for such assessment. First, we at CECORE mapped the relevant stakeholders directly involved in climate and security-related work within and around Kaabong in an inclusive, transparent and open process. Then, we sought community consent through dialogue to conduct two training sessions. Community actors were engaged in the process of climate security risk assessment because local peacebuilding organisations such as CECORE are uniquely placed to bring diverse local actors, including the district's local leadership, elders, religious leaders, women and youth, together because of our long-standing relationship with them. I am proud to say that local actors trust our experience and expertise.

We started the training sessions by creating a safe space for all participants to openly share their ideas. This included answering questions like 'the one thing I am most proud of in Kaabong is…' and people responded with our beautiful scenery, nature and animals as their source of pride. The discussion organically swayed towards talking about climate because climate change leaves its marks on our beautiful nature and our communities.

The link between climate and security is extremely complex. But participants were able to contextualise climate security by telling stories and sharing their observations in their local languages, which led to the development of an agreement on local indicators.

Rooting local indicators in the community: Opinions, attitudes and feelings

Local indicators are trends and facts rooted in local observations of the linkages between climate change and its negative (development, peace and security) impacts. They are collected by documenting stories people tell. Many of these indicators are based on understanding nature – the lived experience of growing up in a community and the indigenous knowledge of the communities. For instance, nature speaks to us a lot all the time, but we tend to ignore it. Think about these two examples:

In Kaabong, some people have the unique knowledge to understand bird migration patterns and their impact on climate and security. Depending on the direction they fly and the sound they make, a drought is pending, impacting peace and stability in the region.

Another local indicator with immense security implications for Kaabong is people crossing the border from neighbouring South Sudan and Kenya. It is a sign of drought in the countries and a sign for the people in Kaabong that it is time to share their limited resources. The question that emerges with the arrival of the neighbours is - it will be a peaceful stay or not.

The two examples of local indicators clearly show how climate and security are linked and how their effects manifest locally. If you tamper with one, the other one will be automatically affected. When local communities experience the impact of climate change, insecurity increases as mistrust arises. This is the case when diverse ethnic groups migrate from Kenya and South Sudan to Kaabong in times of drought, and fights tend to break out amongst the different groups over scarce resources. Women and girls face increased vulnerabilities as they must walk further to collect firewood and water, putting them at risk of sexual and gender-based violence. In turn, the insecurity of local communities drives climate change. To feel safer, they cut down trees to build fences to protect their cattle, harming the environment.

But decision-makers at a higher level do not take this local knowledge seriously enough. I wonder why? In Europe, people also rely on their senses when they see the leaves of trees turning orange in the fall. They know it is time to pull the sweaters out of their wardrobes and turn on the heat.

When developed with local communities, local indicators allow community leaders to plan better and set up early warning and early response systems. Local ownership of local indicators is crucial. This starts in the design phase because when people participate in developing local indicators, they feel an ownership and a value attached to them. When local indicators are formulated in their local languages, they are not abstract. Rather, they are tangible and encouraging.

The international community must take local knowledge seriously in further deliberations of what their action on climate and security will look like.

Disarming the Minds of War: The Story of a Peace Champion in Uganda

Patrick grew up in Buboko, a poor, war-torn village in Uganda. Whilst the violent conflict had ended, chaos remained. As a child, Patrick was faced with violence and chaos, now he is changing the lives of many. His weapon? Peacebuilding.
Read more 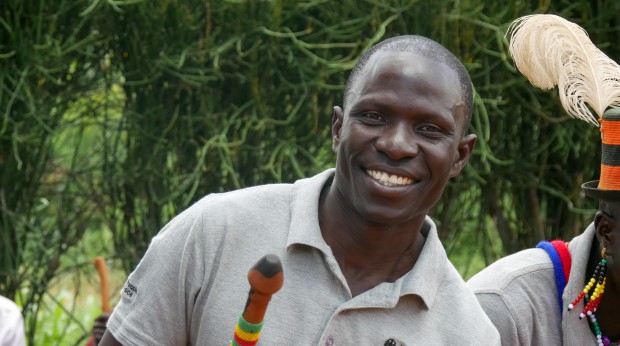