How to ensure funding in conflict and crisis supports the needs of local women: Lessons from Ukraine

Ukraine is under massive rocket attacks. Important critical infrastructure objects were hit at the end of November, resulting in four regions being completely without electricity. In some places, people were left without gas and water supplies.

Russian occupiers shelled at the maternity ward of the Vilniansk hospital in the Zaporizhzhia region, once again targeting pregnant women, women in labour, and children. Women are under constant stress because of civil defence sirens; they give birth in basements during the missile attacks.

Gender persecution extends further. The regions de-occupied by the Russian troops show evidence of sexual violence against women, young and older women and even children, and sexual torture against men. Ukrainian human rights defenders speak about the genocidal pattern of crimes.

Sexual violence is not an accident; it is purposeful and supported by the military and political leadership of the Russian Federation.

For our context, it is critical to invest in addressing sexual and gender-based violence (SGBV) as part of a broader prevention approach. Donors should make three critical considerations to ensure that funding allocated in conflict and crisis supports the needs of local women, including the victims of SGBV:

First, donors must tailor funding to local priorities by ensuring flexibility of funding.

In Ukraine, we see pressure from donors to address the most urgent priorities they have identified. Often, local actors, myself included, are pressured to re-adjust our work in a matter of days. The problem is that our needs are always inferior to those of donors. Donor priorities switch without regard or consultation with local recipients of funding. Further, available financing in conflict settings requires much effort to compile complex proposals when local actors are overwhelmed with programmatic work.

Let me share a good practice. When the aggression started in February, the GPPAC network organised a platform for dialogue among women peacebuilders to provide them with the necessary peer support. This was only possible with access to flexible funding through the core funding GPPAC receives from its main donor, SIDA.

As such, flexibility for us means the ability to use existing/core funding to relocate ourselves and reshape our objectives towards the needs of our beneficiaries. In newly approved emergency funding for Ukraine, the proposals should be light, and the turnaround time cannot be months. By the time months pass, the context will be completely different and require us to readjust again.

Second, donors should build a multi-stakeholder dialogue platform for donor and policy coordination.

There is a strong civil society movement in Ukraine, and many international partners are seeking to support Ukraine. However, there is no single platform to bring all of us together for exchange and building common strategies. Donors coordinate among themselves, but we are rarely invited to such discussions, and we never know what actually happened in these dialogues.

At GPPAC, we recognise that one actor cannot solve the conflict alone. Regardless of how vital civil society is for conflict prevention and reconciliation, we are powerless without partnerships with donors, political actors and technical partners. Without such platforms, we build fences and silos that separate us from each other and feed conflict.

We propose a regular multi-stakeholder platform where donors, political and technical partners, and civil society can bring all tracks of the negotiation process together, meet regularly and exchange priorities. This will help us ensure that the situation of all local populations is taken into consideration. Such a platform needs to be driven by the spirit of co-creation, where donors and peace actors should go beyond the mere financial relationship or relationships of dependence and build a strategic partnership. Furthermore, such a platform must rely on a network approach, meaning each partner has its role and is supported in exercising this role to the fullest extent. In such a platform, donors can learn from local partners and political actors to make informed decisions. Lastly, local partners understand better the limitations of donors and political partners and can identify how they can support government action.

Third, donors must be careful not to destroy what has been working well before the conflict and sustain it.

The GPPAC network has existed in Eastern Europe for almost 20 years. Throughout this time, we have been able to build connections, root peace education, promote historical memory, and advance mediation in the region. While we could not prevent conflict alone, we have been able to create a network of partners from all countries in the region working together. If funding for such initiatives is disrupted, it will take decades to rebuild them. Peacebuilding takes time and cannot stop during conflict. Therefore, donors should develop long-term investment strategies and, where they cannot directly support, use their position and access to pass on relevant opportunities to support fundraising efforts.

We stand ready to discuss with everyone what it takes to implement these recommendations and make quality financing a reality in addressing the need of people in Ukraine and elsewhere.

This piece is based on the statement I delivered during the webinar "Equitable partnerships in support of grassroots action on conflict-related sexual violence: Perspectives from local women's rights organisations and women peacebuilders’’ organised by the Catholic International Development Charity and co-sponsored by GPPAC on 24 November 2022.

In 2013 and 2014, student-led protests broke out against the use of authoritarian power in Ukraine. But how did peace education play a role? And how did civil society cause a shift from mediation in the classroom to mediation on the streets?
Read more 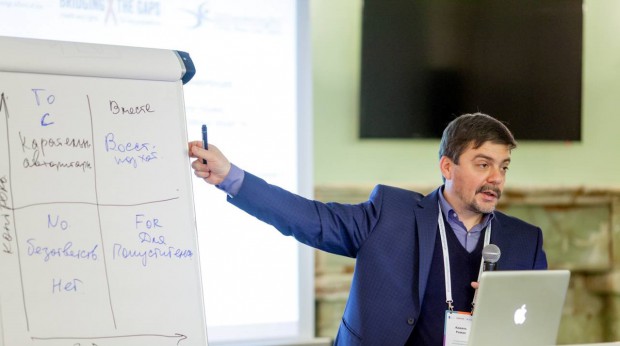