Kyrgyzstan is characterised by a pervasive potential for conflict, internal tensions along ethnic, gender, social, and urban-rural divides. Young people, comprising roughly 50% of the population, express feelings of exclusion from political, economic, and social processes, as well as fatigue from traditional peacebuilding activities. Specifically designed to tackle these issues, the innovative project “Cameras in hand: Transformation and empowerment of Kyrgyzstani girls and boys” was implemented from February 2018 until October 2019 by the Foundation for Tolerance International (FTI), Central Asian Regional Secretariat of GPPAC network based in Kyrgyzstan. This was done in cooperation with GPPAC Foundation based in the Hague, together with GPPAC member, MEND (Middle Violence Nonviolence and Democracy); and Real Time (the originators of the participatory video methodology).

The partners were awarded a grant from the UN Peacebuilding Fund to empower the youth of Kyrgyzstan to act as agents of change, to foster understanding about the ‘other’, to bring new insight to gender roles, norms and issues. 128 participants were selected from different ethnic, gender, and social backgrounds in the regions of Osh, Jalal-Abad, Chui, and Batken.

The project focused on using the creative and engaging participatory video methodology, developed by Real Time (UK), and previously used in Palestine by MEND. The methodology turned out to be very empowering as it required youth to make decisions through democratic discussions within a strong group dynamic, to listen and become more aware of others, while also building their own self-awareness.

By the end of the project, through the presentations and discussions of movies in the course of the feedback sessions, the young Kyrgyzstani participants felt more included in the decision-making and empowered to express their opinions at the local, national, and international levels. They evolved to become messengers of positive change, and contributed to the bridging of divides and resolution of social problems in their communities, such as gender inequality, divisions in the society and fights between children, security concerns or border tensions.

“I became sure of myself. I know that my opinion and my wishes play an important role in the development of Kyrgyzstan. Previously I would complain about problems, now I think of solutions. This was the biggest personal change after participating in the project.” Guliza, project participant

Check out some of the videos made during the project:

Our project in Colombia promotes intergenerational dialogue to empower Colombian youth in the transition from a culture of violence to one of peace.
Read more 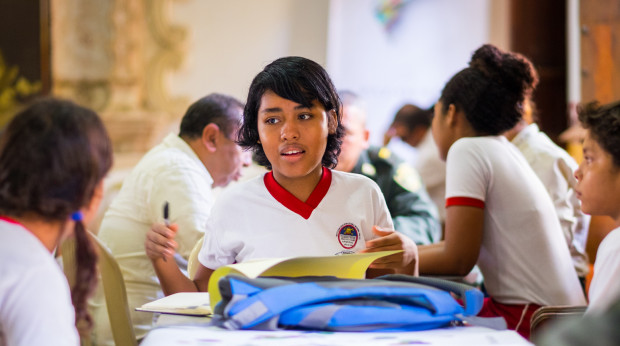