Board Member & Founder of Peace Boat

In 1983, Mr Yoshioka Tatsuya founded Peace Boat. He started organising voyages for education and people-to-people reconciliation between Japan and other Asian countries, and to study Japanese war responsibility. From this vision of promoting people's diplomacy, Peace Boat grew into an organisation that organised over 90 voyages for peace and sustainability. Over the last thirty years, besides being a leading advocate within Japanese civil society, he has engaged internationally with Peace Boat on projects including peace education for Israeli and Palestinian youth, Eritrea-Ethiopia peoples' peace talks, and Northeast Asian people's dialogues. Yoshioka has authored books on the Civil War in the Former Yugoslavia, the Russia-Japan Northern Territories dispute, and on Article 9 of the Japanese Constitution as a global common value for peace. He is a commentator in the Japanese media on issues including the Iraq War and Korea-Japan relations, and has been invited to address the United Nations on issues including peace education and disarmament. Yoshioka is a founding member of the GPPAC International Steering Group, and was nominated for the Nobel Peace Prize in 2009 for leading the Global Article 9 Campaign to Abolish War, to protect and promote Japan's war-renouncing constitution. Since the Great East Japan Earthquake and Tsunami on March 11, 2011, Yoshioka has devoted his energy to the establishment of Peace Boat's Disaster Relief Volunteer Centre, which has dispatched more than 13,000 volunteers to the stricken regions, and to the foundation of a post-Fukushima Global Campaign for a Nuclear Power Free World. Peace Boat is one of 10 Steering Group members of ICAN, the 2017 Nobel Peace Prize laureate.

All Aboard! Dialogue for Peace on the Korean Peninsula

We’re making peace personal with the Peace Corner podcast! Our intern Raphael sat down with Meri Joyce from Peaceboat who has a very unique portfolio: enabling dialogue for peace in Korea.
Read more 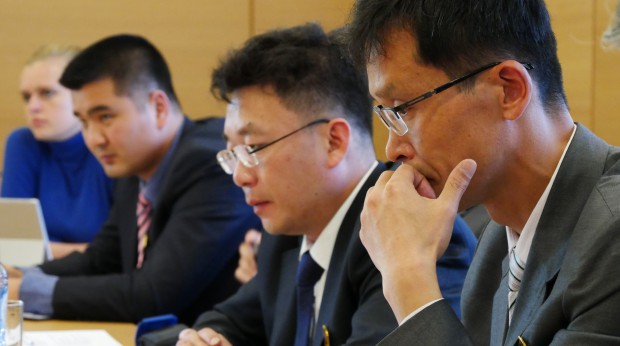