The International Day of Peace is a day to celebrate, honour, remember and observe peace and ceasefire throughout the world. It is an important day to raise global awareness of the importance of peace and conflict prevention. For this day, GPPAC highlights the importance of conflict prevention and shares the work our members are doing throughout the world in order to support peace. 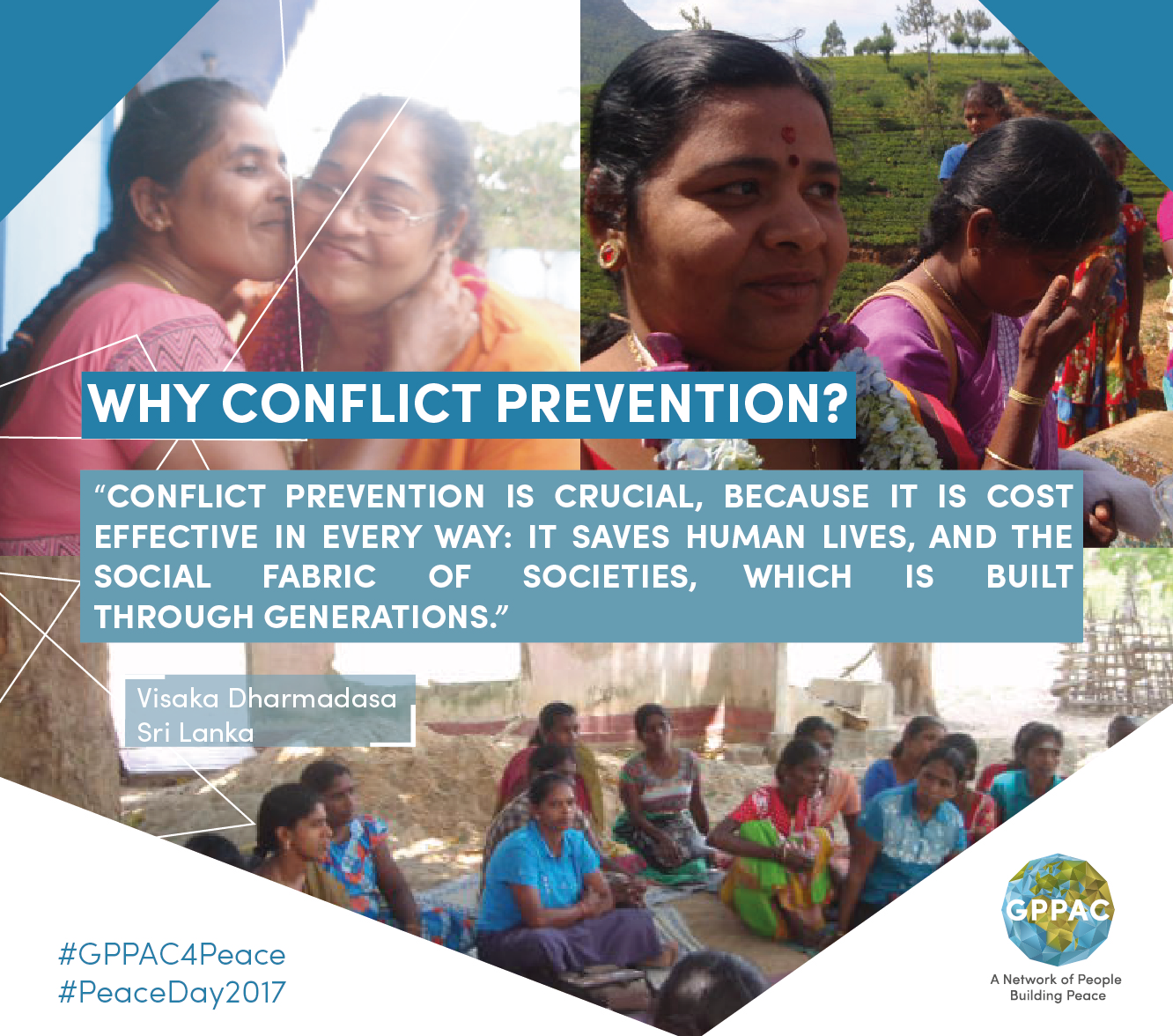 After her second son, a Sri Lankan military officer, went missing in action, she dedicated herself to teaching soldiers and community leaders about international standards related to the conduct of war. Ms. Dharmadasa has designed and facilitated Track II dialogue processes in Sri Lanka. When talks were foundering and leaders of the Liberation Tigers of Tamil Elam refused to speak with members of the Sri Lankan government and Norwegian negotiators, they asked Ms. Dharmadasa to carry messages to the government. For this work, she was awarded InterAction's prestigious humanitarian award in 2006.

Conflict prevention is crucial because it is cost effective. In every way: it saves human lives and saves the social fabric of the society, which is built through generations. For this, Association of War Affected Women and Parents of Servicemen Missing in Action, focus on conflict prevention in Sri Lanka, by advocating to bring solutions to the root causes of the conflict, and work with women on reconciliation. We focus on bringing women from different groups together to understand the troubles of the other side and for them to work together.  We also train women on conflict resolution skills so that they can use those to prevent conflict within their communities. 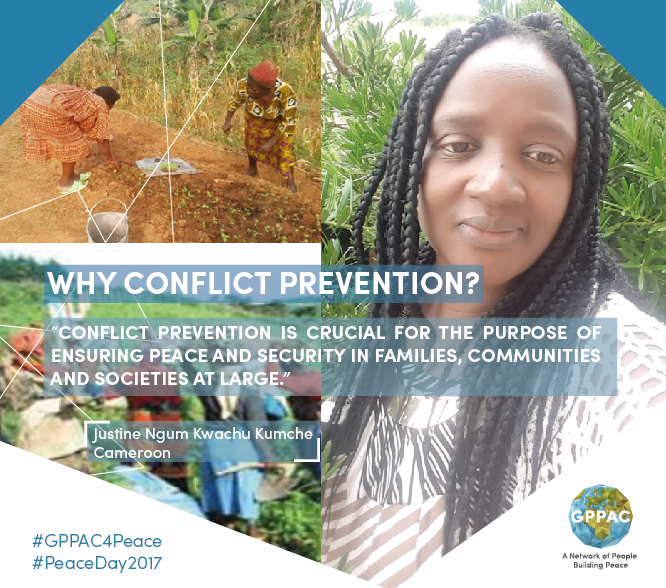 Justine Ngum Kwachu Kumche is Executive Director at Women in Alternative Action (WAA) Cameroon. WAA works to build forms of engagement between men and women that foster collaboration and dialogue, and establish diverse partnerships dedicated to advancing gender equality. Justine is the visionary founder of Cameroon's network of women in traditional institutions known as Queens for Peace International to end harmful cultural practices on women and girls and enhance community peacebuilding and nonviolence.

Conflict prevention is crucial for the purpose of ensuring peace and security in families, communities and societies at large. WAA Cameroon runs three programs to prevent conflicts at family and community levels. These are:

One concrete example of the conflict prevention work done is the case of a farmer grazer conflict that has continued to be the source of community disaccord. Conflict between women farmers and the mbororo cattle grazers in the Wum and the Zoa municipalities of the North-West regions of Cameroon continued to pose food security problems within families. The `Queens for Peace` program has played a significant role in resolving this conflict. The programme involved the wives of traditional rulers  to  actively participate in building peaceful and harmonious communities void of violence in all forms. 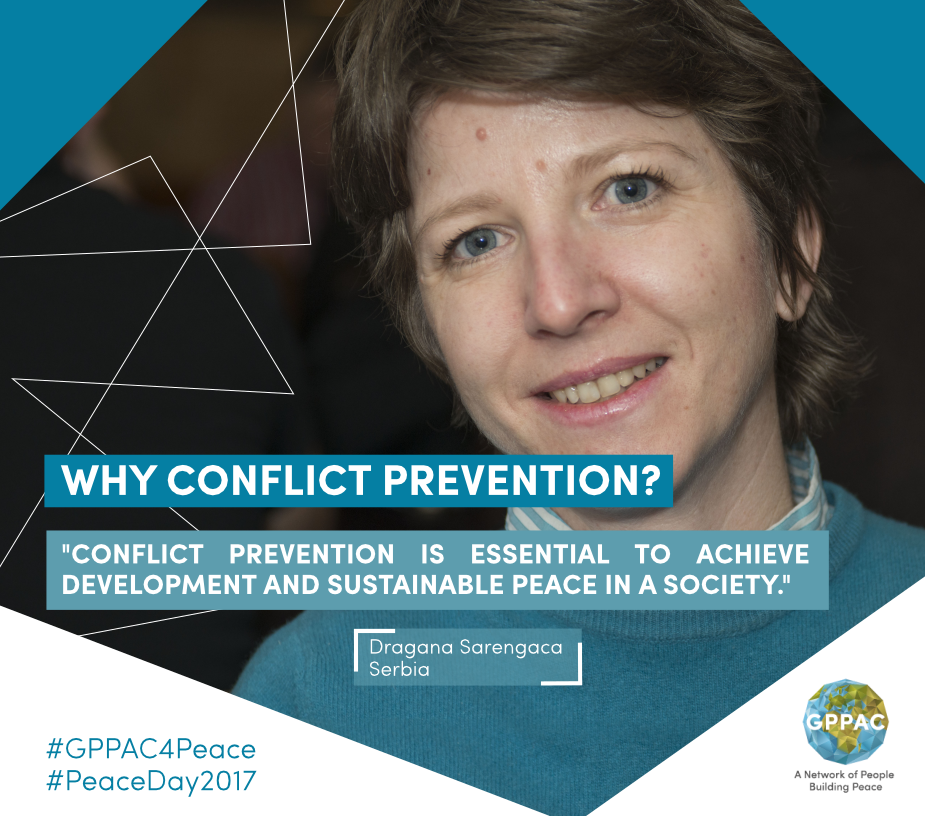 Conflict prevention is essential to achieve development and sustainable peace in a society.
Education is the key to understanding conflicts. Peace education has been a main focus in Serbia and the whole of Western Balkans following the war in former Yugoslavia in the 1990s. We have successfully secured commitment from the Ministries of Education of Montenegro and Serbia, teachers and practitioners to integrate peace education into the official curricula. Teachers in the Western Balkans who integrate peace education values in their daily work are a great motivation to all peace practitioners. They have proved us that anything is possible if you are creative enough and dedicated to peace. 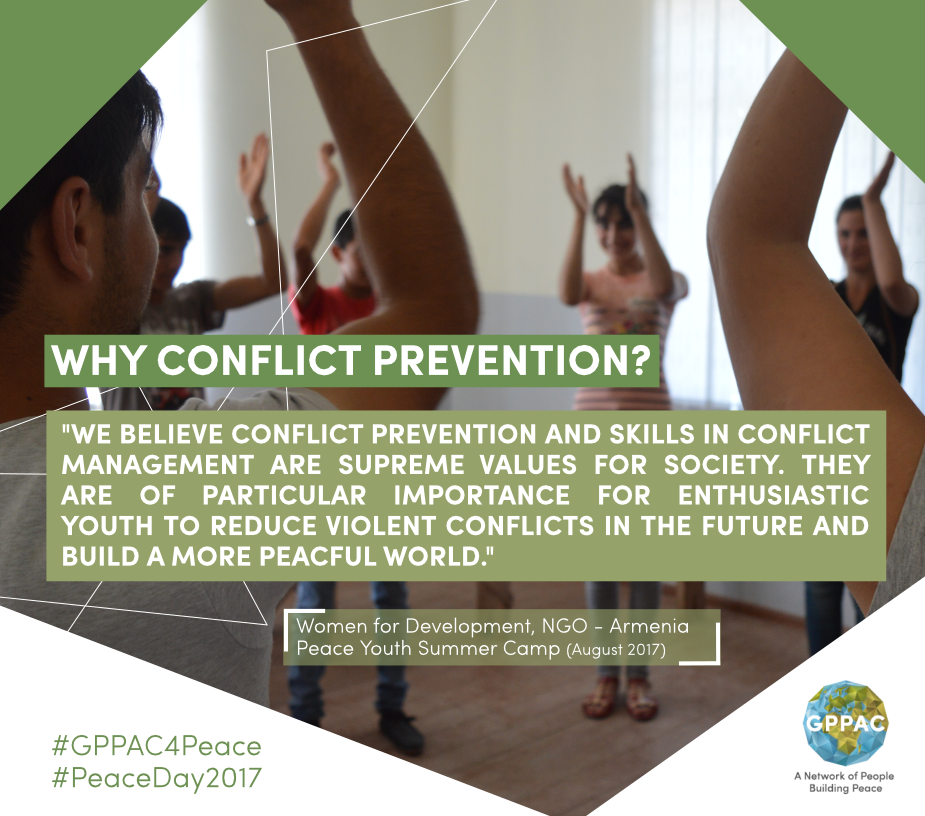 We believe that conflict prevention and skills in conflict management are supreme values for society. They are of particular importance for enthusiastic youth to reduce violent conflicts in the future and build a more peaceful world.

We educate the new Armenian generation of peacemakers because we believe that peace is a supreme value for the society. The biggest achievement of "Women for Development" is the institutionalisation of Peace and Conflict Resolution Education in Armenian schools. As a result of the fruitful collaboration with the National Institute of Education, peace education was taught in more than 850 schools of Armenia. During the past 15 years, more than 70,000 schoolchildren acquired and applied skills in conflict management, thus reducing the number of conflicts resulting in violence in schools.
Additionally, we organise yearly a children's peace exhibition, Peace Youth Camps, and the International Peace Conference in order to promote the value of peace across borders, generations, and cultures. 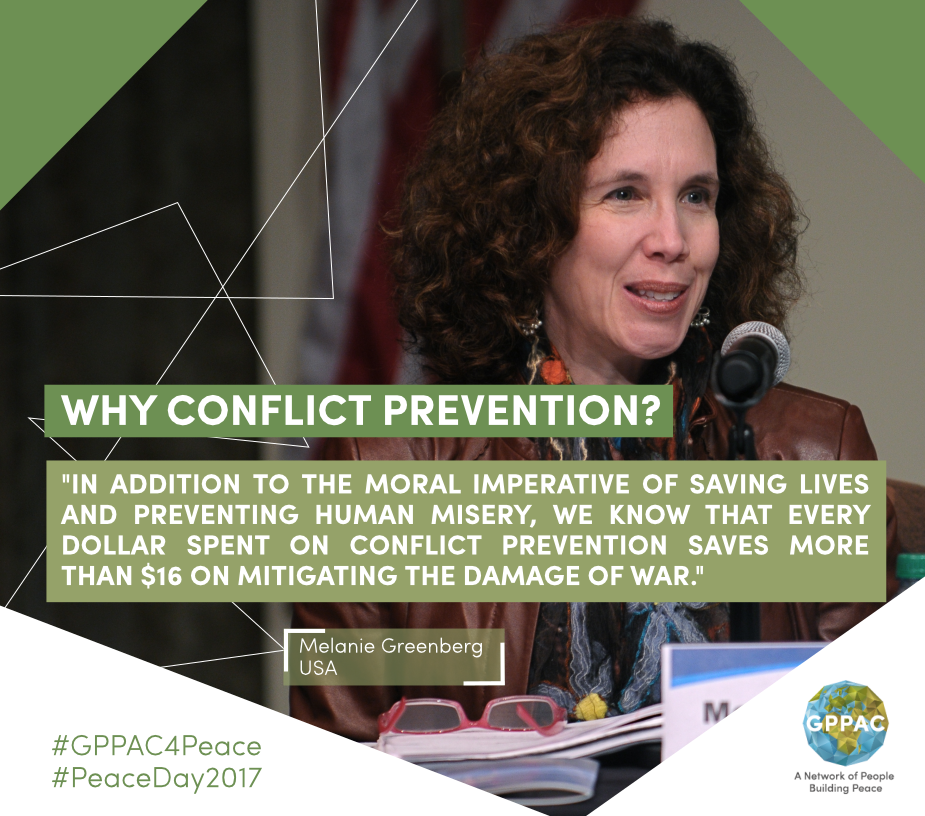 In addition to the moral imperative of saving lives and preventing human misery, we know that every dollar spent on conflict prevention saves more than $16 on the costs of mitigating the damage of war; with this calculus, there is no excuse for not investing more heavily in conflict prevention, and learning to overcome the obstacles to preventive thinking. 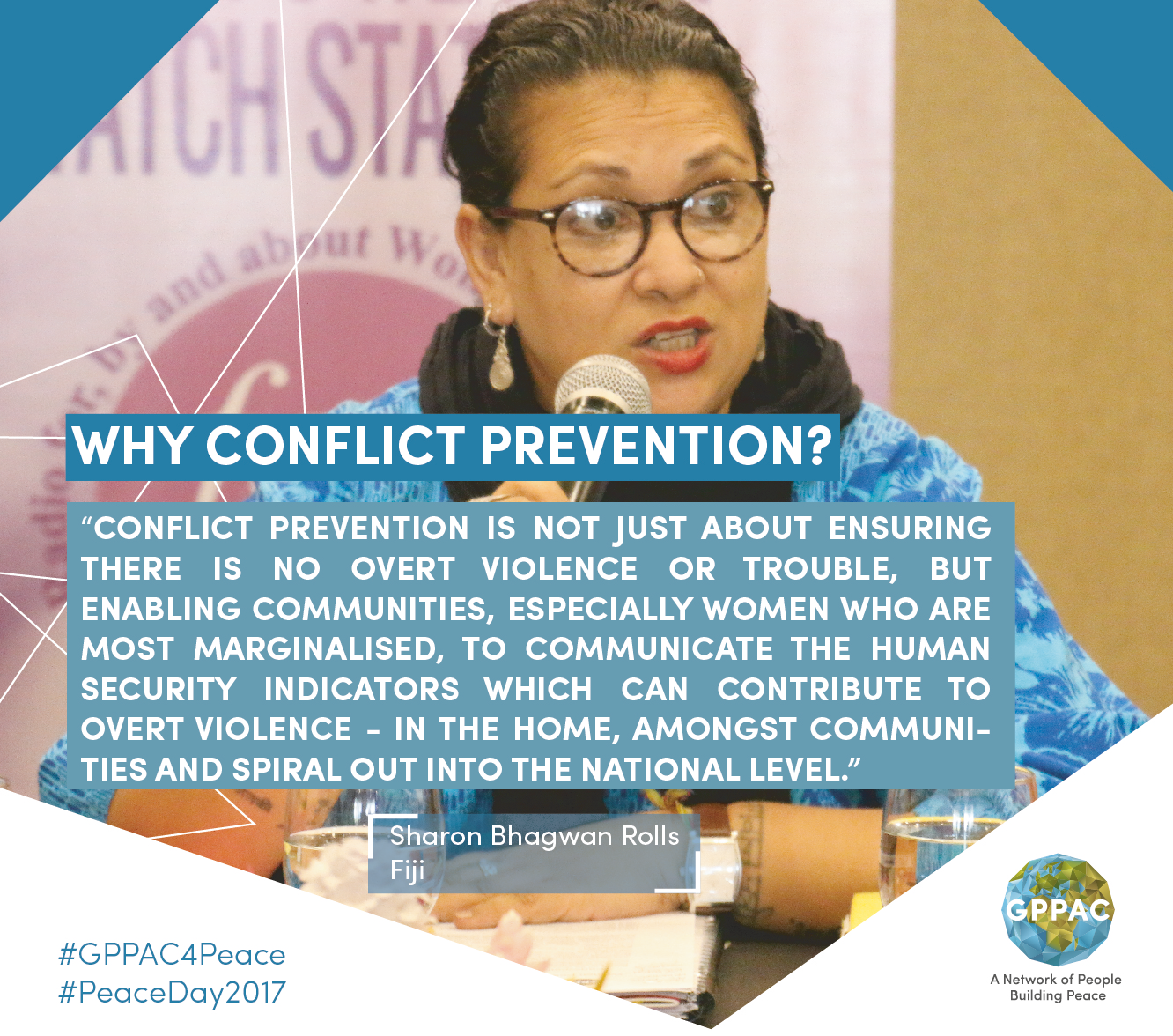 Stemming from the reason why femLINKpacific was established and why we began convening a network of women leaders and media correspondents dedicated to the implementation of UNSCR 1325, our work has been dedicated to contribute to the prevention of the resurgence of conflict and violence as we have experienced not just in Fiji, but also Solomon Islands, Bougainville, Tonga and Vanuatu. Conflict prevention is not just about ensuring there is no overt violence or trouble but enabling communities, especially women who are most marginalised, to communicate the human security indicators which can contribute to overt violence – in the home, amongst communities and spiral out into the national level.

Because of our work using community media, the GPPAC Pacific network has been able to bring Pacific voice and experience in the development and adoption of a number of regional strategies including the Conflict Prevention and Human Security framework, the Pacific Regional Action Plan on Women, Peace and Security and the Security Sector Governance principles. But we also expect action – via state mechanisms and processes which need to transform themselves to make these commitments a lived reality. Our governments need to be more accountable to a human security approach and linking conflict prevention particularly to the development process. We also still need, and expect renewed collaboration with regional inter-governmental processes to bring Pacific Peacebuilders, including women, to the table with government officials. 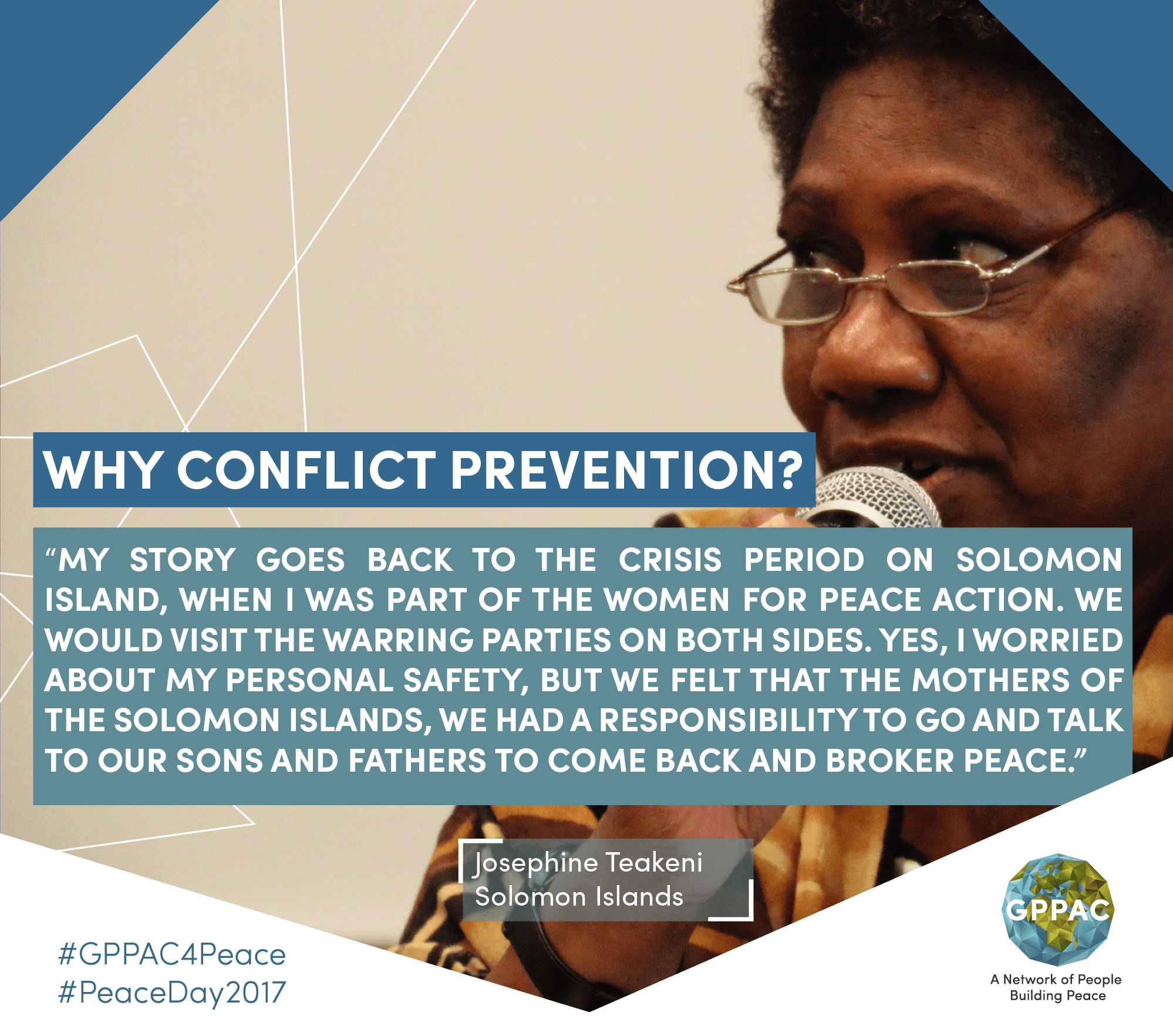 In the Solomon Islands, there is a lot of rehabilitation work happening in different areas since the crisis due to the ethnic tension. As a country we have been through disaster. My story goes back to the crisis period of the ethnic violence which took place 1998-2003 in the Solomon Islands when I was part of the Women for Peace action. More than 90% of the islanders are ethnic Melanesians, but there has been intense and bitter rivalry between the Isatabus on Guadalcanal, the largest island, and migrant Malaitans from the neighbouring island. The Solomon Islands is striving to recover from civil unrest between the groups in 1998-2003 that brought it to the brink of collapse. During the crisis period, we visited the opposing parties in conflict on both sides. Yes,  I worried about my personal safety, but we felt that the mothers of the Solomon Islands, we had a responsibility to go and talk to our sons and our fathers to come back and broker a peace. For me, conflict prevention is dialogue and mediation.

The work that we do every day in Vois Blong Mere is actually empowering women to raise their voices and to have access to relevant information, whatever economic, health, education or environment information that will help them to make informed choices in their own development. I would say the work I do every day is all about implementing UNSCR 1325 and helping women to access information. With the launch of the National Action Plan for Women, Peace and Security we will continue with our advocacy and awareness on the human security aspects of peace in Solomon Islands, because peace is not only when there is RAMSI or when there is a police force in place, but when you are peaceful and secure every day.