More than a day for flowers: The story of a woman peacebuilder

Four days of protests in Kyrgyzstan’s Southern city of Osh, fueled by wealth inequalities, alleged political corruption and the underrepresentation of minorities, erupted into a fully-fledged ethnic clash on the 10th of June 2010. Kyrgyz and Uzbek youths took up arms, with violence spreading to surrounding cities. Thousands fled, some seeking safety in neighbouring countries. In response, the government provided an interim grant for security forces to shoot to kill, causing hysteria to descend upon Kyrgyzstan. Begimai Bekbolotova, GPPAC member and Public Relations Manager at the Foundation for Tolerance International (FTI), who was working to spread humanitarian aid in Osh at the time, began to question the society in which she lived. Women like herself were involved on the ground and heavily impacted by the events. Why were they not given the platform and tools to contribute to building peace? So began the journey of a strong female peacebuilder, fighting for other women’s rights and a better future in Kyrgyzstan.

Overshadowed by the cloud of stigma 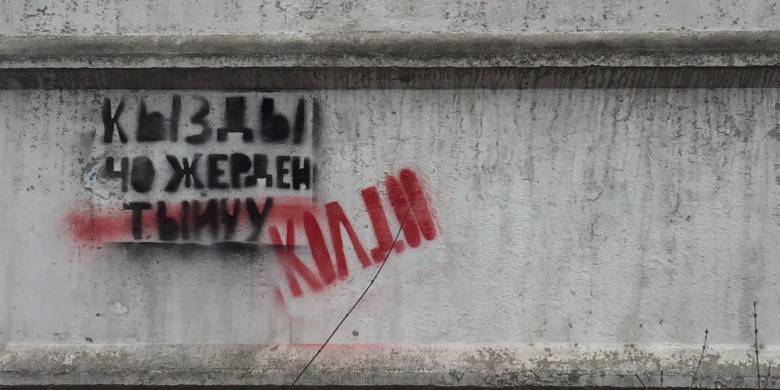 Violence, forced marriages and kidnappings are part of the harsh reality some women in Kyrgyzstan face. These issues are often swept under the carpet. In 2015 Human Rights Watch reported that women in Kyrgyzstan suffering from domestic violence are chronically unsupported by the legal system that is in place. The fear of no justice, coupled with low levels of education, makes it difficult for women to bring these issues to the table. Even when these problems reach parliament, they are met with scepticism. In October 2017, Aida Kasymalieva, the youngest female MP in Kyrgyzstan raised women’s issues in session, such as the high prevalence of domestic violence, child marriage and bride kidnappings. Her brave attempt to speak out on behalf of women in Kyrgyzstan was greeted by her male counterparts walking out.

Cultural perceptions about the role of women within society, reinforced by the media, only heighten the inequalities they face. In 2005, Kyrgyzstan was found to be the only country not to have national representation of women at parliament. The president of Kyrgyzstan has since signed a bill to increase the quota of women’s participation to 30%, however this has caused a divide within society.  In 2019, a local election held in the North of Kyrgyzstan faced opposition by men, resulting in a joint letter being sent to the president and parliamentary speaker, raising concerns about the proposed role of women in national parliament and public administration roles. With the next election looming this year, women such as Begimai remain uncertain, but hopeful about how the use of this bill will play out. 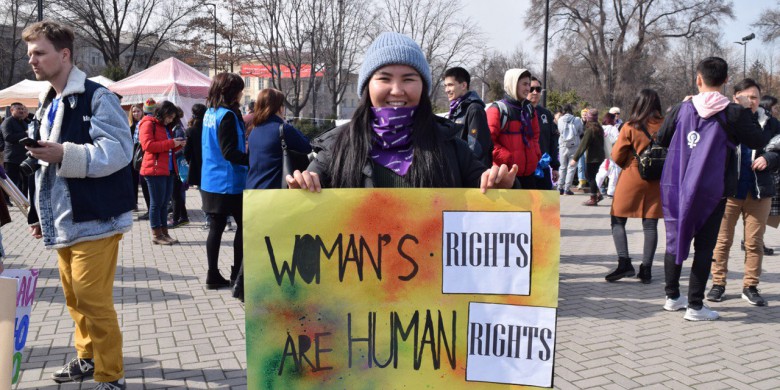 Whilst the role and rights of women seems to be overshadowed by stigma and stereotypes, feminist peacebuilders such as Begimai are working to create a society which is not willing to accept anything less than equality.

The 8th March every year marks International Women’s day. In Kyrgyzstan this historically was a day for appreciation, in which women were given flowers and chocolates. However, this tradition has been met with the criticism that it reinforces patriarchal views of women as homemakers. Since 2016, Begimai has been part of a movement which uses this day not just as an opportunity for appreciation, but to raise awareness for women’s rights.

Around 400 to 500 people participated in a march in Bishkek last year, organised by the Bishkek Feminists Initiative and other activists. The subject was security, a fundamental and basic right that everyone deserves, something which should exist 24 hours, 365 days a year.

Begimai believes that “not just one part of society can fight for the human rights of all women in Kyrgyzstan. Change can only be achieved when you work together”. 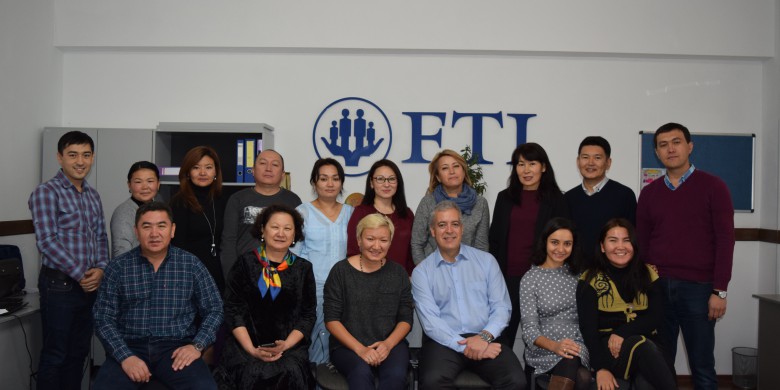 As well as raising awareness for rights, through her work at FTI, Begimai helps to support women within the Kyrgz community. FTI is committed towards achieving a non-violent, tolerant and democratic culture.

Within her role at FTI, Begimai has helped to produce workshops that promote inclusion. Specific focus has been given to rural areas of Kyrgyzstan, where there are often groups of religious women whose lives are defined by the confines of stereotypes. Within these specific groups of women significant changes have been seen. Religious women have organised meetings outside of these specific projects, helping to spread the word.

A particular success story Begimai was keen to share with us was from a rural village: “Women started to play sports together, forming a football team. It is amazing how just a few women can have such a substantial impact. After playing sports, together they began to find solutions to problems they were all facing”

Despite the barriers faced by women in Kyrgyzstan, the success stories and hope for the future shone through in Begimai’s story.

"I hope that in the future, all women in Kyrgyzstan will have the opportunity to freely choose, have more freedom and economic independence, not depend on the opinions of others, to live without gender stereotypes and discrimination. I wish in the future that we will not need a quota, because women will have their rights, access to political life and public administration jobs.”

Begimai represents just one of many, dedicating their lives towards a better future for women: a seat at the table, political participation and the ability to contribute to peace. A strong woman whose efforts should be recognised. Today at GPPAC, we celebrate women across the world!

Marching towards inclusion in Sudan

“In Sudan, women feel the impact of the level of living, of war, of poverty; whilst being responsible for their children and family, providing for their basic needs and at any moment knowing that the government can stop their work.”
Read more 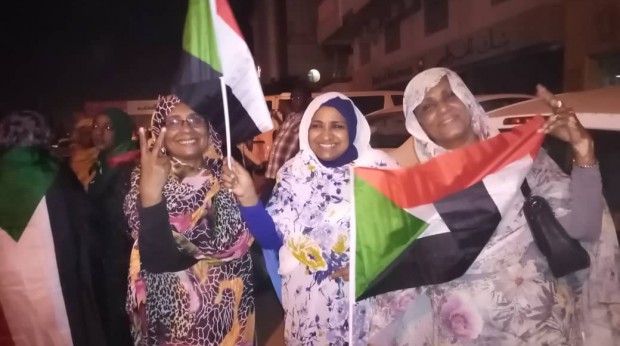