The human security lens highlights how people experience insecurity at a personal and community level. However, such day-to-day realities are often directly influenced by political developments at the national, regional and international levels. This is especially evident in the case of Mali, where not only have transnational factors played a role in the evolution of violent extremism, but where development and governance structures have been shaped by the heavy presence of bilateral and multilateral partners. With the crisis that began in 2012, the role and influence of these partners have taken on new dimensions, notably with the introduction of the United Nations Multidimensional Integrated Stabilisation Mission in Mali (MINUSMA) and the renewed commitments of the international community to the 2015 National Peace and Reconciliation Agreement. 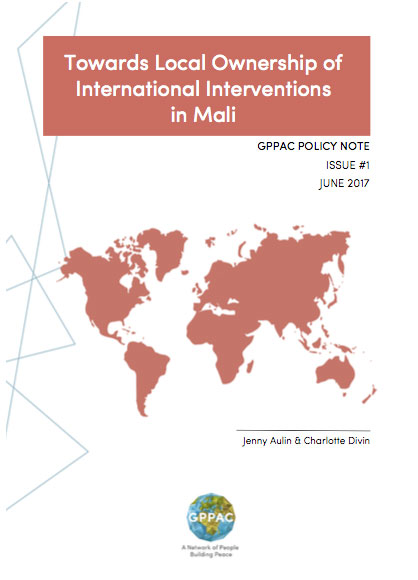 The international statebuilding and peacebuilding support is frequently framed around the objective of "strengthening the social contract" between the Malian state and the citizens. For internationals to contribute meaningfully to such an endogenous process, it is necessary to continuously consider the dynamics of local ownership. This entails raising questions such as: Whose analysis and priorities guide the interventions carried out by the international actors? Which stakeholders are involved in the implementation? How are these actors and actions monitored and evaluated, and to whom are they accountable? And is there an exit strategy for international partners?

This paper examines some of the dynamics surrounding the international interventions, with particular (if not exclusive) attention to MINUSMA, from the point of view of local ownership. If understood as an inclusive approach, this lens can serve to reorient a state-centered paradigm towards human security.

From Notorious Fighter to Peace Ambassador

The inspiring story of a young fighter turning his life around to become an inspiration for peace.
Read more